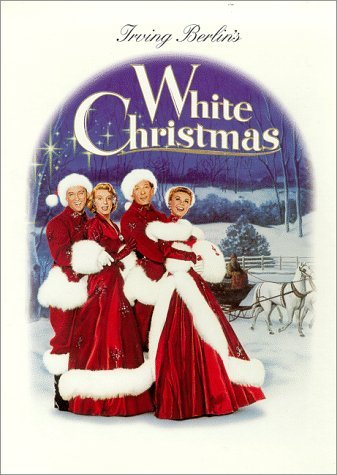 (First in our small series of holiday films reviews. Coming soon: our next xmas film up, Die Hard)
I am a really big fan of Christmas, especially Christmas movies so I decided I would watch a few I have never seen before and write about them along with returning to old favourites. First up is the Hollywood Christmas classic White Christmas (1954) directed by Michael Curtiz and staring Bing Crosby and Danny Kaye.

Bing Crosby plays Bob Wallace an entertainer turned army captain during WWII. He befriends Phil Davis (Danny Kaye) and they put on a show for the troops in their company on Christmas Eve in 1944. Davis suffers a broken arm after saving Wallace from a falling building when their company is attacked by the enemy. Feeling indebted to Davis, Wallace agrees to add Davis as a duet in his solo act once the war is over. We see from a Hollywood classical cinema montage that Wallace and Davis become big stars on the stage as a duo and even go on to become producers of their own shows. After meeting the Haynes sisters (whose act they go to check out before the holidays by request from an old army buddy), their Christmas plans in New York City are set aside to go with the girls to Vermont. The rest of the film takes place in a ski lodge that happens to be owned by their former commanding army general, General Weaverly played by Dean Jagger. The general is losing money because their has been a long spell of no snow in Vermont and thus no tourists. The group of performers decide to move the Wallace and Davis show to Vermont to help the general out adding the Haynes sisters to the act.

This film has all the elements of a Hollywood classical musical. There is a dancing, singing, some laughter, a romance plot, and a splash of camp. Bing Crosby does not disappoint with is smooth velvety voice. Danny Kaye as Davis is perfection. His humor and quick reactions are enough to make anyone chuckle from time to time. I never knew he was such a good dancer. He and Vera-Ellan, as Judy Haynes, have great chemistry and she keeps up with Kaye effortlessly. Their first dance scene together was just a pleasure to watch. They dance around with such grace it just makes you wish you could move around like that in everyday life. Rosemary Clooney, who plays Betty Haynes, has a voice to rival any women of her time. It mixes so well with Crosby’s. I didn’t like her character as much though. Betty gets mad at Wallace after being told that Wallace was going to televise the show with loads of sponsors she thinks that he has sold and is only doing it to further the career of “Wallace and Davis”. She lets him know she is mad by being aloof and a bit rude but she never tells him directly why she is mad even after he asks several times and even apologies not knowing why. Instead of confronting Wallace and asking him the truth she runs .This becomes nothing more than a means to add a plot point where Betty and Wallace will potentially not get together in there will be no happy ending. It is weak and I did not buy it at all. 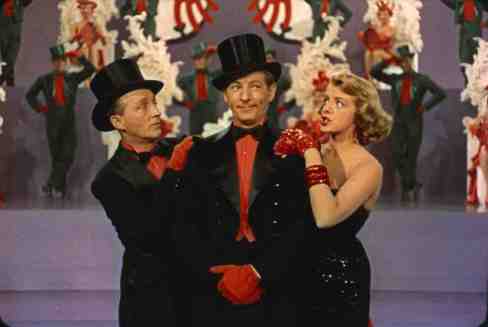 The film is a group of musical numbers strong together by a very loose narrative. Don’t get me wrong, some of the songs and dance numbers are very catchy and entertaining but the film is not very Christmas-y at all. There are only three Christmas or winter related numbers in the entire film. Even then two of those numbers are “White Christmas” sung at the beginning and end of the film. Bing Crosby singing “White Christmas” is enough to put anyone in the Christmas mood but the rest of the film just seems to forget that the film title suggests this is a Christmas movie. I went into viewing this movie thinking this was really going to get me in the holiday spirit. The cover of the Blu-ray has the main character in Santa inspired outfits of red and white and it is snowing. It suggests s cheer, eggnog, and all in all a great Christmas watch. I swear just from the cover I thought I was going to end up making sugar cookies. But after watching the film it did not put me in the Christmas mood. I did not want to make sugar cookies or wrap presents. In the end I can see why this movie is one of the classical Hollywood musicals but you would find it nowhere on my list of top Christmas movies.

Editor’s Note: May I recommend a film I saw recently on the underground Christmas music collecting industry: http://www.youtube.com/watch?v=1wUIIssu9_E -Jacq