Our coverage of Toronto’s The 8 Fest continues. For information, go to the festival site:

Scenes of street traffic, sights through windows, factories, train tracks, buildings, and silhouettes of people, flash back and forth across the screen. The images coalesce and pulse at the heart of the screen. das Bild means “image.” The visuals scroll for the viewer, but ultimately they animate upon the viewing.

Winter hits many with that big first impression: the air makes you feel it, sometimes like a soft pillow, but of the time like knives on exposed skin. In this film, the subject is seated, what seems, reluctantly on a bed of snow. They are coved from head to toe in a cushioned snow suit. Only the face is seen squinting against the cold. Then bottles of blue-green (turquoise) liquid are thrown at the subject. The subject receives each blow and the cold along wit it with a wince.

What’s attacking the person in the snow? What hurts more? The deep freeze or the unrelenting attack?

I particularly enjoyed this piece because Toronto is used to being in a deep freeze right now. Instead we’ve been experiencing a very hesitant Spring. It’s a bit unnerving and goes well with the climate of this reel. 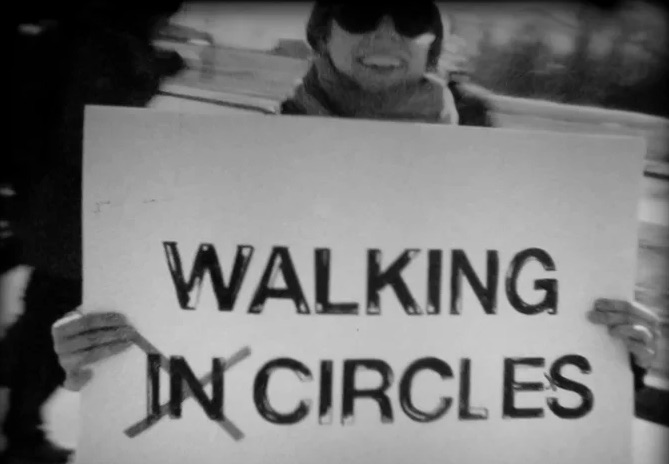 Having known people affected by the York University strike of 2015, it seemed as if it was both a painful headache and heartache for many for all involved. One of the most interesting things I find in strike situations is the rituals of it all. There’s the chants and, as seen in this film, the circle. There’s a method to the repetitive madness. A form a community is shown the collective action of circle and the camera speeds up dizzying the viewer. Then it finds it’s place through the sounds of drum and radio. I found the drumbeats at the end a little bit of an homage for the indigenous space the university resides on. In the end, rap is heard on the radio, like an ongoing chant for the urban life that surrounds the area. Walking In Circles in mindful and aware of the environment it takes place in and tries to give voice to the cause it’s showcasing as well as to the history of its setting.