In a ponderous and uncalled for move the movie that put Eli Roth on the map as one of the Splat Pack (Greg McLean, Darren Lynn Bousman, Alexandre Aja, Neil Marshall, Rob Zombie, Leigh Whannell, James Wan, Robert Rodriguez, and Adam Green) Cabin Fever has been remade for a post The Cabin In The Woods / It Follows generation. And it saddens me to lump this flaming piece turd in with those two superior pieces of genre but here we are.

It plays more like “I know who you fucked last summer while you were being over privileged assholes rather than a viral disease” flick. Given the recent outbreaks of Ebola and Ziska the pickings for something groundbreaking and truly terrifying were there, but filmmaker Travis Zariwny instead opts for the exhausting “kids trapped in the woods” tropes. 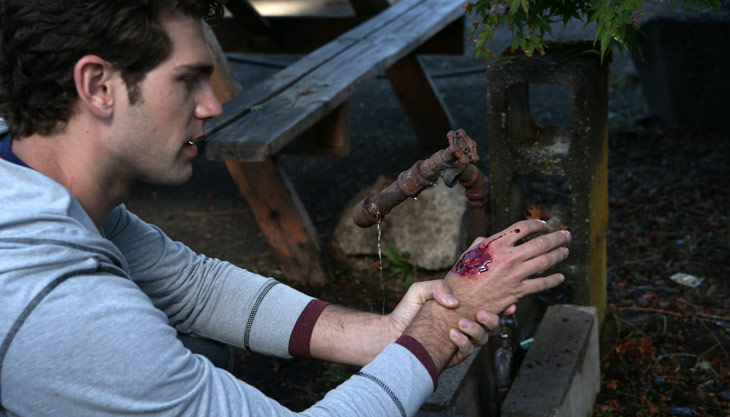 The 5 annoying teens head out to the woods to fuck and smoke and do exactly what every teenager in the woods has done since time immemorial. The only bit of originality is squandered on gross-out gags and jokes the deaf wouldn’t laugh at. It got to the point where I actually rooted for everyone to die. Seriously. Every single person in this movie should perish in the most painful of ways. Then I think at least I’d feel something more than roiling contempt for this movie.

Trust me, folks. I’m here to do your horror bidding and take several for the team and watch this dreck! Y’all can head out and watch Deadpool and actually enjoy your movie watching.