Tackling relationships in film authentically can be a tricky business, especially if they’re about broken or blended families. There’s nuances and intimacies that get glossed over many times in favour of getting on with the story. Then sometimes there are movies that make entire films about those underrepresented little things that make up familial conflict.

In Jan Zabeil‘s Three Peaks (Drei Zinnen), Aaron (Alexander Fehling) invites his girlfriend Lea (Bérénice Bejo) and her young son Tristan (Arian Montgomery) to cabin in the Italian Dolomites for a family vacation. Aaron and Lea are deeply in love and willing to make the next steps to be closer. But Aaron’s relationship with Tristan shifts from extreme closeness to angsty tension. Tristan has an obvious bond for Aaron, but is either really protective/attached to his mother or is still dealing with his mother’s separation from his father. Lea tries to lay down the rules, but even she is unsure of how to make their dynamic work. 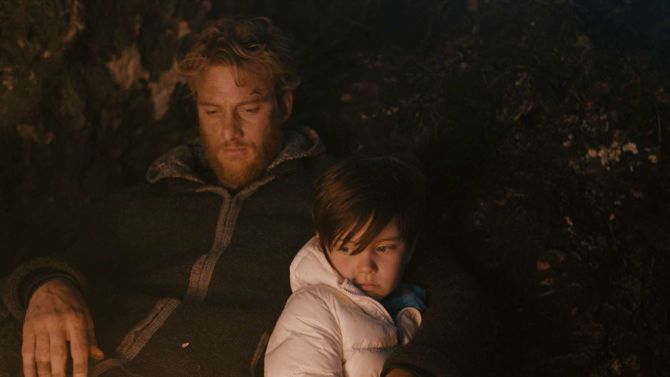 The performances are superb. Bejo and Fehling play out their character’s obvious chemistry with a tension that is just under the surface due to their restrained circumstances. But the explosive work comes between Fehling and Montgomery that deftly go from tenderness to intense vitriol in a flick of an eye.

Axel Schneppat‘s cinematography captures the isolation and alien-like landscape of the Dolomites which surround the cozy cabin that the trio inhabit. I believe a third character can be made out of the three peaks that are the title of the film, that while they form a “sleeping giant” according to Aaron, it’s one that lies wait for anything and anyone. The film is reminiscent of Force Majeure, with its cold and desolate landscape, but there’s no funny punchline here. Depending on how you view it, it’s either a revelation or the film leaves with a disturbing tension that’s hard to shake off.

It’s a great film and a reminder that you can’t choose your relatives, but sometimes love makes you powerless to choose relationships despite their dangerous complications.