You capture a moment when you take a photograph. The suspension of time and space with no context can become a story or a mystery. What leads up to a photo being taken? What happens afterwards? What about the focused object and the world around it? While a photo comes to life in the eyes of a viewer, what reality is a photographer trying to interpret? Their own, or simply the world as it is? 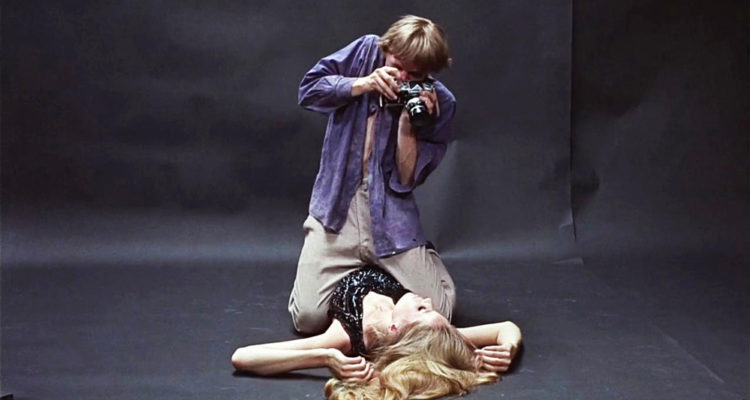 Michelangelo Antonioni was a master of form, colour, and open interpretation. He captured images to play around with a viewer’s own illusions of what he presented on-screen. In Blow-Up, Antonioni holds up a fixed lens on Swinging London and Thomas (David Hemmings), a young talented photographer. Thomas drives the best car, wears stylish clothes that go with his Beatles-que hair. He’s high fashion and attempts to create intellectual contrast by taking pictures in a homeless shelter for an art photography book he’s putting together. Highly sought after, he is also at his prime, but he feels something is missing. Feeling a lack of substance in his life, he buys random things like a plane propeller or thrift store landscape paintings. Thomas photographs famous models for his craft, yet holds women in contempt.

One day he skips (he frolics, rather) to the park to find a new subject. He spots a man and woman tenderly embracing and kissing in a grassy field. He hides and takes pictures. The woman (Vanessa Redgrave) looks around agitated, chases Thomas, and demands he hand over the film. A small struggle erupts between the both of them and he tells her that he’ll give her the photos on another day. Looking scared, she runs away.

Thomas develops the film and blows up individual photos. Staring at them, he’s intrigued by what he perceives as a shadowy image of a person with a gun in one of them. In another picture, there appears to be the outline of a body on the grass, like a white ghost seen on a flash. This scene is a pivotal point in the film and one of the most fascinating things ever filmed by Antonioni. By placing the subject, Thomas, in the middle of the blown up images he has taken, viewers witness a moving pictures interacting with still ones. This creates a story, much like a story board, where the thinker, Thomas, tries to make sense out of what he is seeing. Did he the witness to a murder or is he seeing wants to see? He gets obsessed and find happiness in his suspicions, even trying to confirm them in his mind as he goes back to find a dead body in the park. Later he goes back to photograph it, and it’s disappeared, along with any trace of the woman from the park, and even the photos. 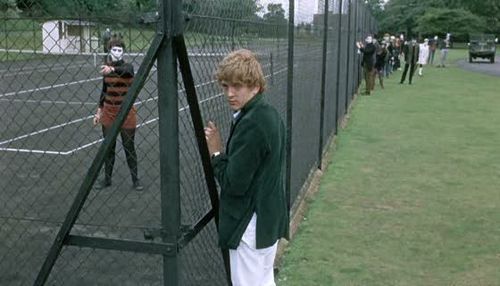 In the final scenes we view Thomas watching a roving band of mimes, mimic a game of tennis. We watch his eyes follow the invisible ball and even throwing a missed ball back. He looks to the ground and in a flash he disappears too.

Antonioni has created an intricate puzzle of cinema for the viewer, all the while playing around with the inner screen of the mind. Think of it this way, when looking at a film, one gets sucked into a story, witnessing play out to a wrapped up conclusion. When film is used to challenge perception, a viewer is forced to look into the many facets of a movie. Thomas questions his reality when confronted with the idea that maybe he didn’t see anything. When the woman confronts him about the pictures in the park, even flirtations play upon his sense of place:

At a party he finds Verushka, a model he had photographed earlier, but had to hurry the session.

“Thomas: I thought you were supposed to be in Paris.”

In Thomas’ search for meaning he sought something more from his photographs, a story he might have created out of shadow in light. Thus, Antonioni plays with cinema’s creative manipulation of reality via still photographs and scenes that might not have ever existed to his protagonist. I mean, the film has mimes that talk!

Mime: Give me your money. Do it.

Antonioni’s film takes viewers on a journey to find what they can before them and behind the lens. Thomas’ disappearance in the end is a subject, an idea, being absorbed by the camera’s frame. In turn, it becomes part of the viewer’s experience. The film becomes a riddle on what is real. It becomes a storyboard of what it means to capture images and a create story out of those images.

A director like Antonioni knows full well that film is captured perspective and to play around with a viewer’s ocular perceptions of the here, now, and future, especially through colour or light and shadow, is truly what cinema magic is all about. 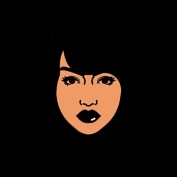